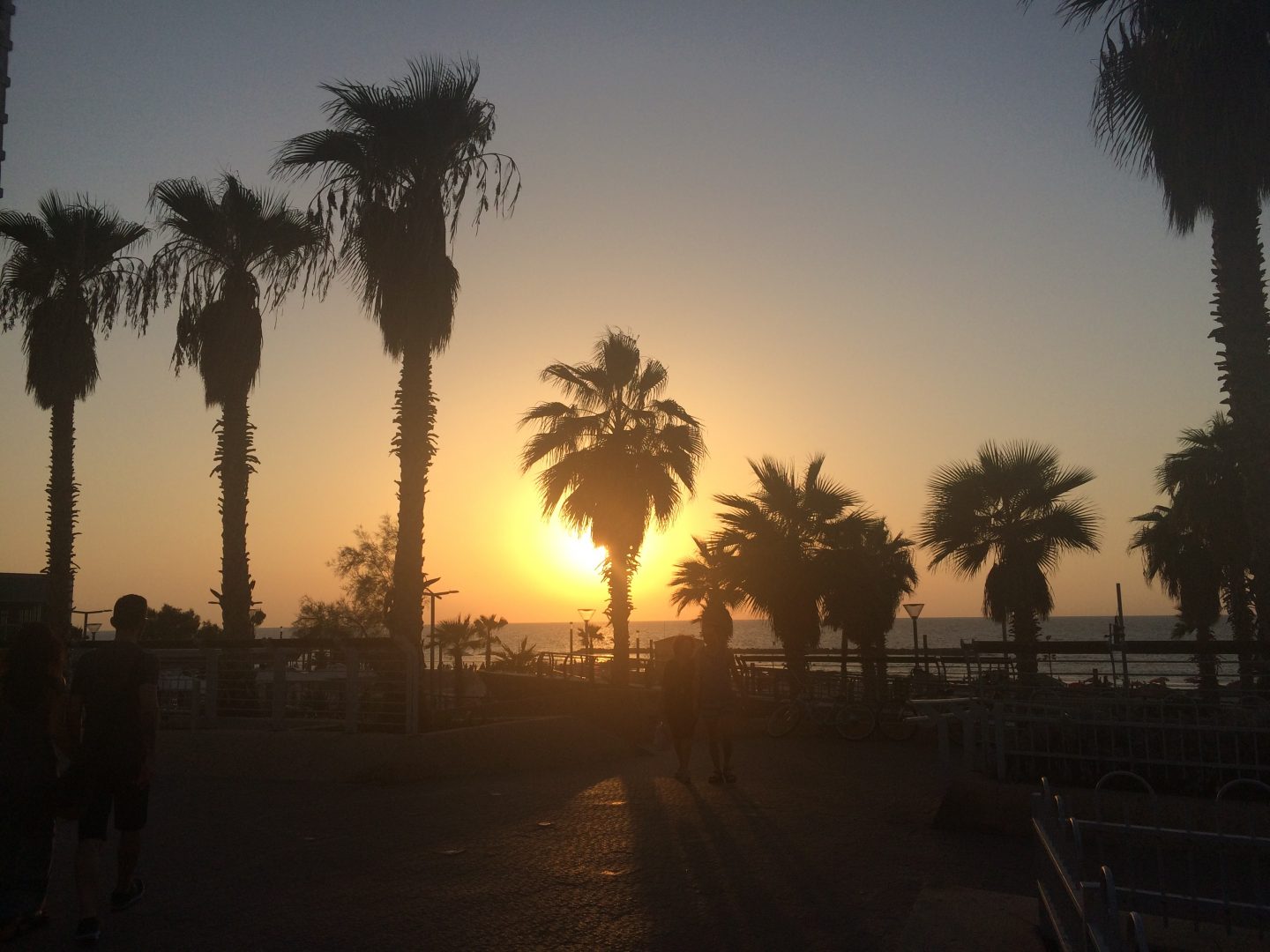 Trust me there. I have fallen deeply already. And that’s only one reason why I picked this to be my first blog post ever. So read this, get tempted and then go there!
I still remember those first times coming to Tel Aviv, when I had just started to work as a flight attendant. It happened a few times, with never more than 24 hours to spend.

It was magical right from the start. I would wake up in the mornings, so excited to get up, like some kind of early bird. And whoever knows me might have to read this twice. Then I would have watermelon and feta cheese for breakfast, sitting in a cozy chair at the banana beach. The blue ocean was right in front of me, inviting me to come in.

There were surfers all around and everyone seemed to be as beautiful as Bar Refaeli. The city was full of art. And by that I mean street art at practically every random corner, looking a lot like the pieces of Banksy. But the creative vibes didn’t stop there.
Every place, every café looked special, like an art piece itself. While globalization sometimes makes me feel like all cities are starting to look the same, I was impressed by the diversity. I would walk down Ha’Carmel the beautiful market, getting a fresh squeezed juice or cup of pomegranate on the way. After finding some beauty products and souvenirs too much time would have passed already. It was always a shame.

I noticed all this amazing fashion, and too many beautiful quarters to visit in one day. There was way too much food to eat in those few hours. And I always had my eyes on the turquoise shimmering sea at the horizon tempting me to get a little closer.

And soon the sun would be setting and I was trying to catch a few hours of sleep. In the middle of the night I got back into my uniform. And when the crew bus closed its doors, I would still hear the ocean calling my name.

So it was clear. This would be my next vacation.
I started a list. Whenever a magazine featured Tel Aviv, I wrote down the hotspots they recommended.  One day I read this article about models and what they pack to visit their favorite city.
Germany’s next top model winner Sara Nuru picked Tel Aviv and as a result I had to add more stores and restaurants to my notes.

A few months later my friends and I boarded the plane.
The flight time from Germany counts only about 4 hours. And now this is the second reason why I chose this to be the city for my first blog post.

It happens a lot that friends or passengers seek a little advice when it comes to their next trip. Often the duration of the flight is an important criterion. Whether it’s because they are only off for a week and want the flight time to be in relation, they travel with small children or suffer from a fear of flying, Tel Aviv will be a great choice.

How to get there and where to stay

So we picked a Lufthansa non-stop flight from Frankfurt to Ben Gurion Airport. We had decided to book an Airbnb apartment and were really happy with our choice. I knew the area in Kerem Hatemanim already from my former stays in the David Intercontinental Hotel and had always liked it. You have so many options on Airbnb in Tel Aviv that it’s actually hard to decide.

Due to the bus stop nearby, we went by public transport, which worked out great. It was one 20 minute train ride from the airport to El Al Junction and another 30 minutes bus ride.

The area is full of breakfast places which was a big plus for us. The beach was not further than a 10 minute walk away and so was the Ha’Carmel market. Neve Tzedek is another quarter I like a lot. And Florentin is also a great choice, further away from the beach though. Just to give you some alternatives.

Start your day with a great breakfast The funny story behind Café Suzana is that I had always remembered this place.  Well or at least what it had felt like to have a wine under the big trees in their garden with all those little lights on. But unfortunately I had forgotten the name and had no slight idea where it had been located.

But it turned out that it was also one of the tips from Sara Nuru on my list, and so I rediscovered it for myself.
I highly recommend this cozy place with the delicious appetizers.  I’ve been there at night before but I’ve really gotten to appreciate their breakfast, too. It is served till 1pm by the way.

Café Benedict is located pretty central and also a favorite of mine. Due to the easygoing atmosphere it is nice for groups or families, too.
They already had me with their all day breakfast. But the unlimited Nutella and bread really delighted my German heart.

Even though I love trying out new things we found ourselves going to Hamitbahon a lot. It’s a cozy place with nice staff and a warm atmosphere and we often sat outside in between flowers. They do a really great Shakshukka, which is a Middle Eastern egg dish served everywhere in Tel Aviv. And maybe that’s just me, but I loved having the cat around.

Usually city beaches don’t tend to be that nice. Here they are right by the city, yet beautiful.

I mentioned Banana Beach earlier. It’s easy going with cafés and a surf school around. If you’ ve always thought about taking lessons, this might be your adress.

On Fridays it will be livelier due to drum sessions by locals.
A more quiet option would be Alma beach, a little further south.

Further north you’ll find Gordon and Frishman. As they might be the most popular ones they tend to be crowded.
They are fun hotspots to do people watching or to be seen. With plenty of options for water sports and life guards around you can get active. To relax on the other hand you’ll find chairs in the find sand and bars around.

The Hilton beach named after the nearby hotel is rather posh with beautiful people around. With lockers and showers around it is easy to feel comfortable. If you’re going by yourself this is a good place to sit, think and read.
It’s also popular among surfers and dog lovers and the unofficial gay beach. Other ways to spend your day

You can do a lot by foot, which I personally enjoy. And due to the “FREE_TLV” Wi-Fi zones you are pretty independent, too.

If you get to be there on a Saturday join the Bauhaus tour. It starts at 11am at Sderot Rothschild/Rehov Shadal. Learn more about the city’s architecture in this free walking tour. Just bring your comfy shoes and some tips.

Before you start enjoy the city’s kiosk culture and grab a coffee to go at Gili kiosk on Rothschild on Allenby. It is only two blocks away from the meeting point.
Or arrive ahead of time and walk Rothschild down all the way to Herzl. The Espressobar Rotschild was the first kiosk of the city and has been around since 1910. Nowadays it’s a stylish hotspot.

Another thing to do in the daytime is the Old Jaffa walking tour. It starts daily at 10pm at the clock tower. Have a look at the old town and visit the flea market.

I can recommend you to take a stroll around those markets. Not only that I found my favorite shirt I wore all summer on one of the markets. You will also get to discover the daily life of the locals.

Shuk Ha Pishpeshim might be the nicest. It offers everything from little knick- knack to vintage founds. Starting at 9am you can visit it daily, except on Saturdays.

The Dizengoff on the same-named street is great for interior or jewelry lovers. It’s on Tuesday from 11am-8pm and Fridays 7am-4pm.

Nachalat Binyamin is also on Tuesdays and Fridays from 10am-7pm.
You’ll see street artists performing along the way. And you have a wide range of handmade goodies such as pieces made of leather, paintings and jewelry.
Whoever sells his stuff here tends to be talented, so make sure you stop by.

So by now you have probably gotten a great feeling for the city. I still have a few nice things in store to do during the day, some amazing dinner places and fun night life for later on.

I’ll let you know how you can treat yourself in Tel Aviv.
We’ll talk ice cream and which trips you can take. I also want to share my view on security with you. And take you to one of my favorite spots as a Woody Allen fan.

Even though this article has turned out longer than planned I hope you’ve enjoyed it.
Stay connected.
And feel free to get in touch for any feedback, questions or recommendations.