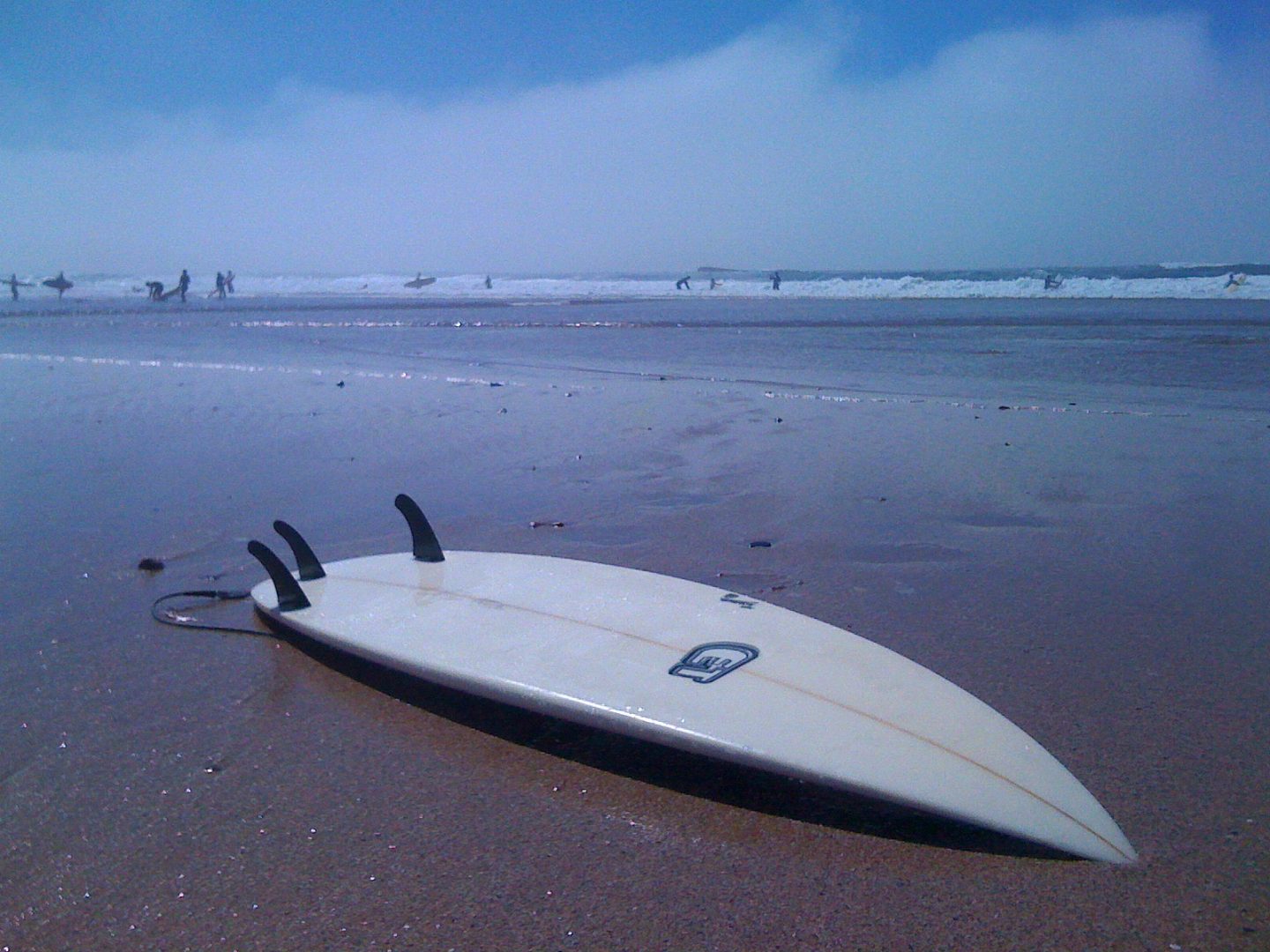 Surf and Yoga have complemented each other for a long time. For the past few years the popular camps have sprouted up. And I can tell you, they work like fresh-baked bread and Nutella.
It first occurred to me when I read about it in a magazine. Then I didn’t think about it for quite a while.

Someday, somehow I had a week off when nobody else did. This is when it came back to my mind. I knew this was the perfect vacation to do by myself.

Why Surf and Yoga?

What makes them such a great team? First of course there’s the feeling of happiness we associate with both of them. A relaxed and carefree way of life comes up to our minds. Near-instantly an idea of freedom is in our heads.
Second of all they interact in many ways. One example is the balance of your entire body. So by practicing one of these sports you automatically improve your skills for the other.

Then practicing yoga will reduce the muscle pain from your surf as you release the tension faster. And it will make you lean and strong, which might save you from the one or another injury.

My research was quite successful. I found surf and yoga camps in many places, such as Portugal, Morocco, Bali, Mexico, Sri Lanka, South Africa, Spain, France and Australia.
I picked Portugal because I only had one week off. And I hadn’t been to Portugal besides any duty trips. So it had never been more than one off day for me.

Another decision you will have to make is the category. You’ll find camps from the high end version with a spa to easy ones in the woods. I picked something in between.

The view when we landed in Faro was amazing. This was the first and so far last vacation I ever did by myself. And I still remember the thrill of anticipation in that moment. The camp wasn’t too far from Faro, so I allowed myself a driver. The Surf experienced was first established by Conny and Dago, the parents of Pro Surfer Marlon Lipke. Once I had arrived I received a warm welcome and a tour around the house.
It was April and in effect high season hadn’t started yet. As a result I got really lucky and had the three bed bungalow to myself. It had Hawaiian décor and a poster of Marlon surfing a huge wave was up on the wall.

I booked Vila Catarina by the way. The main house offers the spacious living room and several bed rooms. You can play pool in the house, watch a DVD, or just relax by the fire place.
The open space also features a large dining table, where everyone gathers for breakfast and dinner. The above mentioned bungalows are behind the house where you also find a pool.
As an alternative to Vila Catarina you can book a self-catering villa, which is perfect for couples or travels with friends.

Getting ready to surf We’d start early in the mornings with breakfast in the house.
Everyone would prepare their sandwich for lunch and get packed for the day. Meanwhile the surf coaches picked some nice spots depending on the weather and the experience of the group.
I was a beginner as I had only surfed once before, on Block Island ten years ago. First you get an introduction on water safety, like not to surf alone.
You practice in the sand how to get up on the board. And learn what you need to know about the etiquette, taking of lineups. Finally the moment you’ve been anticipating during those dry runs has arrived.
Usually the first attempts take place in the white water.
Obviously you need to gain speed to be able to catch your first wave. Paddling can be demanding at first. But luckily the surf instructors helped us out with a push now and then.

I’ve never had the strongest arms, so it took me a little while to get up. “No pain no gain”, that’s what they say.  And I can tell you, once you do it blows your mind. It’s like the purest feeling of freedom running through your veins paired with nothing but luck.

I couldn’t even put it in words. But I had still remembered it from that time back on Block Island. As mentioned before the weather affects the perfect beach to pick for the day. With an instructor who can evaluate your level and the size of the waves you can’t go too wrong.
Because trust me there, you’ll be happy once you’ve finally carried you board, bag and wetsuit from your car to the beach. You don’t wanna have to walk up the cliffs again, due to wrong waves.
We went to many beautiful beaches such as Amado, Arrifana and Beliche.
It was such a fun group of people. No matter if we were out in the waves or just hanging by the beach, we always had a good time. Days in the sun pass to fast. We all know that.
Two nights we ate out in town and Lagos was fun, too.
We had cocktails at the Mellow Loco bar, which belongs to Melvin, the camp owner’s younger son.
On regular nights we’d all have dinner in the house. It was always fresh and nice, with products from the local farmer’s market.

With the early alarm clock and all the exercises, the week turned me fast into a morning person. At 10pm I typically fell into a deep sleep in my bungalow.

I attended the yoga typically in the mornings or before dinner. You can as well book just the surfing but I wanted to do both.
This is another thing I had only tried once before so I was a little worried. But the yoga instructor was awesome.
Maria was this positive person that easily thought us new poses.
I don’t remember us ever being more than three, which was nice. And after only a few days I could reach poses that I hadn’t dreamed before.

So I’ve mentioned the pool and Conny’s nice cuisine. Therefor the title may be a little irritating.
But besides the familial atmosphere something else touched me in this week – peace. It was the easy lifestyle that somehow refueled me.

I didn’t go on the internet besides that second after dinner. And every single night I fell asleep way earlier than I ever do. I would wake up in my room with the colorful curtains and posters of Hawaiian looking surfers. In the yard I refilled my water bottle from the tap. I didn’t wear makeup or even a watch. Hearing frogs sing on my little walk from the main house. It couldn’t get any more natural or peaceful.

“The worst day at the beach is better than a good day at work.” Their motto was printed on beer coolers and stickers.
Maybe this was all too good to be true.
Soon the week had passed.

I was taking a last picture by the beach. “Would you like me to take it for you?” a voice asked. I looked up and at first I was blinded by the sun.
It was Marlon, who had been on that poster in my room from the day I arrived.

One last picture, and I left, with nothing but these memories and – as usual – a little sand in my shoes.

Check out the camp I picked here: http://thesurfexperience.eu/